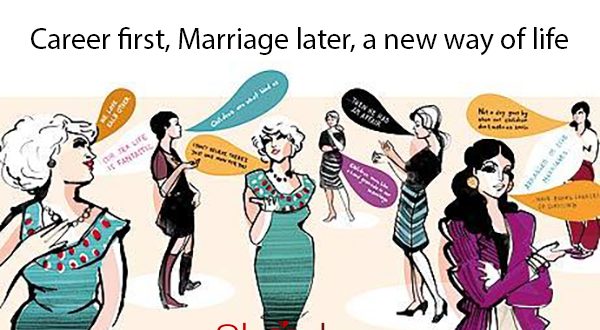 Social pressure is the most unavoidable thing in any of the circumstances particularly in marriage case, society wants to see the norms to be followed. It do not bear any deviance. First, it sets the norm and then force you to follow it.  In some of the social setup marrying at some fixed point of age is very crucial. Marriage is the soul of social pattern. Social fabrics can be coarsen if the marital relations and bonding have some unusual and unnatural schemes to follow. Society accepts change gradually unlike it confirms status quo. Particularly, Pakistani society has some stubborn behavior regarding marital matters and accept no alteration in the pre-determined rules and principles. Marrying before 30 years of age is the appreciating act and getting late in marrying bring a bad name to one’s character especially in case of women. Man is somehow exempted from the compulsion of must marrying rule before 30’s.

Man’s marrying late is not looked down upon, but women’s crossing 30th   year of her age is an issue of paramount importance to discuss.

Late marriage but with right man

Career oriented lady is exempted from the age bracket for marriage

Men and women are equal in any walk of life. If a  man can be career oriented and looking for the best life ahead and want to focus on career then why not women is allowed to have her career in focus instead of getting her married in early age without giving her time to nourish her skills and be professional.

Late marriage is not a deviation from society

We need to normalize late marriages. It is not an issue to get her hitched late but the real issue is when you get her hitched with wrong husband in hassle. Shaadee.pk helps you understand the stray misunderstandings and misconceptions. It tie the relations but in true essence not for the sake of marriage only. Marry those who deserve you not those who marry you just because you are in the 25 of your age and are super young.

Previous Are you telling her that ‘happy women is a myth’
Next When in Marriage, listen more, speak less; you are successful.

How sudden fantastic relationship turned into the hardest one? How infidelity plays role in ruining …